Living a Legacy of Generosity

This month I spent a week visiting family and friends in my hometown of Denver. One of my rituals is going to the Fort Logan National Cemetery where I visit the gravesites of my mother, maternal grandparents, and uncle. And so a flood of fond memories is unleashed.  I say fond because each person shaped me, in childhood and into adulthood. It would not be overstatement to say their generosity made me who I am. 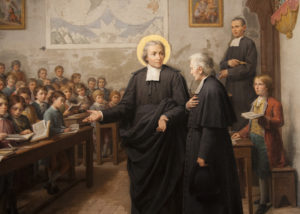 My sense is that if you too are drawn to this Lasallian mission and charism, you are drawn by this same spirit. That spirit of generosity lives in the heart of the story of John Baptist de La Salle. His earth-bound story ended three hundred years ago, and this year we celebrate his legacy. It is a legacy even more enduring than the brotherhood or the schools he founded. In a word, it is a legacy of generosity.

We can trace his legacy to Jesus, for De La Salle lived as Jesus lived, resolutely generous even in the face of opposition. Well before his arrest and crucifixion Jesus was aware that the political and religious climate was dangerous; he was a wanted and hunted man. He lived in full awareness that he was a marked man. Jesus’s healing and teaching ministry was carried out in the shadows of a gathering storm.

Yet, he carries himself with grace and grit. His self-emptying and “daily deaths” are loving acts, not despairing ones. In the face of opposition and rejection he continues to love and to love deeply. He remains in relationship even as his followers break away (John 6.66). He does not waver from his mission to bring light out of darkness and sight out of blindness. He is not embittered by those who conspire to quench his spirit. His response is not defensive or defeatist. Rather, it is loving.

Seven years before De La Salle’s death, he goes to the south of France. During this time (1712-1714) he experiences a period of deep desolation, perhaps a “dark night of the soul.” The weight of people and systems is almost too much to bear and he questions his very calling. Then, in the spring of 1714 Sister Louise and the principal Brothers bring him back from the brink. His response is not defensive or defeatist. Rather, his motivation is, simply, “God loves and so I love.” “God’s love is gratuitous, so I too want to be generous.”

When he returns to Paris he doesn’t just resume his administrative work. He rejoins the community and lives the life of obedience and association. He re-assumes his fatherhood and undertakes spiritual accompaniment of the novices. He gives his full energy to his calling to be Founder and composes what will become the foundational texts for the Brothers’ apostolic spirituality, the Explanation of the Method of Interior Prayer and Meditations for the Time of Retreat.

What a blessing this tercentenary year offers us: in recalling how De La Salle’s generous spirit transforms despair into life-giving energy for the community, we are given an opportunity to add a new chapter in this 300-hundred-year legacy. An opportunity to both bring love and generosity to challenging situations and to bring life to the next generation.