Relationships are at the heart of the twinning program between schools in the Lasallian Region of North America and the Lwanga District of Africa. Those relationships received a boost with the visit of Brother Ghebreyesus Habte, FSC.

Brother Ghebres began his October 20-31 visit at the Christian Brothers Conference office in Washington, D.C., followed by the Regional Conference of Christian Brothers meeting in Minneapolis, Minnesota. From there, he visited a number of schools in the three U.S. Districts with the hopes of strengthening relationships by making a personal connection, learning more about U.S. schools, and sharing details about his ministries. 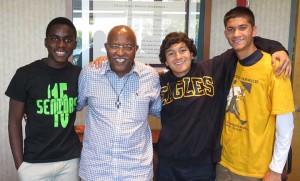 His school visits began in Minnesota at Holy Family High School in Victoria and Totino-Grace High School in Fridley. At each school, he described donations American students make to their twinned schools as acts of salvation. At almost every stop, he asked students and faculty to stand up, hold hands, and walk in place to signify walking together with young people in Africa.

“I thought it was very moving and I took a lot away from that,” said Anna Kinnan, Totino-Grace student. “We are a community and we aren’t alone. We are walking with someone in a different place around the world. We walk together as Lasallians and all of our barriers are brought down. How amazing is that!” 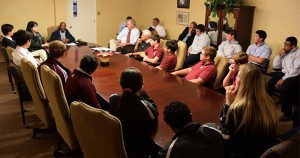 Brother Ghebres, who became Visitor of the Lwanga District July 1, 2014, brought that message with him as he traveled to Louisiana where Archbishop Rummel High School in Metairie hosted a meeting with students from the other three area schools: De La Salle High School and Christian Brothers School, both in New Orleans, and Saint Paul’s School in Covington. After that meeting, he visited each of these schools.

Students asked Brother Ghebres questions about his District and learned about many students’ poor living conditions, their lack of Internet access, and how they start each prayer with “Let Us Remember.”

“It was as if we had known Brother Ghebres forever, like we were talking to an old friend,” said Sam Kenney, a sophomore at Saint Paul’s. “Even though we come from two very different places, we are all united globally under the Lasallian charism.”

Brother Ghebres’ visit then took him back to the East Coast, starting in Washington, D.C., where he visited Saint John’s College High School and spent time bonding with students by playing basketball and talking with student leaders.

Next, he was on to Calvert Hall College High School in Baltimore, Maryland, where students led him on a tour, even stopping to try out a few dance moves on stage. The friendly interactions and Q&A about his District left a strong impression on students. After the visit, senior Chris Swartz wrote this college essay on the impact of meeting Brother Ghebres.

From there, Brother Ghebres went to Philadelphia, where he spent time at Jeremy House and was surprised by a reunion with Brothers whom he had served alongside in Africa. He had dinner with postulants before visiting La Salle University the next day. At La Salle, he toured campus and met with students from the university and La Salle College High School in Wyndmoor, Pennsylvania. 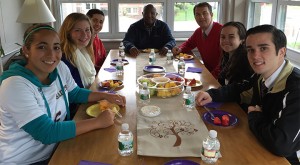 Then he was off to Rhode Island, where he visited The San Miguel School of Providence, Saint Raphael Academy in Pawtucket, and La Salle Academy in Providence. The visits included tours, talks with students, and more basketball – a favorite of Brother Ghebres.

“Each year, we do ‘Earning for Eritrea’ to raise money for our twinned school, so it was interesting to learn more about our brothers in Africa and what the students are willing to go through in order to get an education,” said Niko, an eighth grader at San Miguel. “It was inspiring, and it makes me appreciate all the privileges that I have.”

The students weren’t the only ones inspired. Brother Ghebres left the Region sad and joyful – sad because the visit was finished, but joyful because of the connections he made and what he learned.

“I can say for the first time I started to know who American students are and their level of maturity, responsibility and service for their school and their community,” he said. “I learned that they are already learning to be leaders for the future. I saw and learned what it means to be Lasallian. I learned what can we do in our District to arrive in that level of the knowledge you have about the Founder.”