Brother Robert Schieler, FSC, was honored with Brother John Johnston, FSC Award for his significant contributions to the Lasallian mission. He received the award during the opening session of the Huether Lasallian Conference on Thursday, November 17, 2022, in Baltimore, Maryland.

Established by the former Regional Education Board in 2009, the Johnston Award is now presented by the Lasallian Education Council (LEC). It was named in honor of Brother John, the 25th Superior General of the Brothers of the Christian Schools, for his uniquely significant lifetime contribution to the Lasallian mission. The Johnston Award recognizes Brothers and Lasallian Partners who, like Brother John, have endeavored on the international or Regional levels over the course of many years to advance the Institute’s mission to provide a human and Christian education to the young, especially the poor. It is presented to those whose leadership, teaching, evangelization or scholarly research and writing have borne witness to an abiding faith and zeal, and whose efforts have had a transformative impact upon the founding story as lived today.

In accepting the award, Brother Bob highlighted the importance of fraternity, building a sense of brotherhood and sisterhood in the Lasallian family as a way to help make transformative education possible. Read his full remarks here. 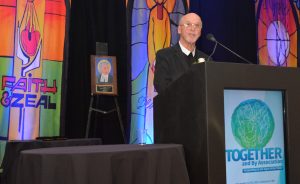 “I’m just so grateful for the many people who mentored me. I think of so many people who made it possible that somebody would want to give me this award, especially John Johnston, and the first two awardees, Miguel Campos and Luke Salm, when this award started,” shared Brother Bob. “Whatever I’ve been able to do, it’s because of so many other people who accompanied, who supported, who pushed, who inspired. As I said when I was elected Superior, whatever is accomplished is because of the great Lasallian family. It’s no one person. In many ways, the award belongs to a lot of people.”

“Brother Robert’s selfless service to our Region and the global Lasallian community combined with his commitment to advancing and sustaining the Lasallian mission during an incredibly challenging period in our history is worth celebrating and recognizing,” said Dr. Kurt Schackmuth, LEC chair who serves as vice president for mission and associate provost for student success at Lewis University. “We are so grateful for his leadership, his inspiring example and his witness to the core principles of our Lasallian tradition.” 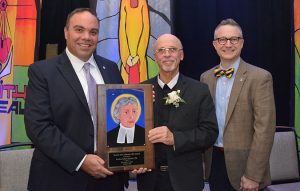 A Brother from the District of Eastern North America (DENA), Brother Bob recently completed eight years of service as Superior General (2014-2022). He is the third American, including Brother John, to serve in the role. Brother Bob previously served as General Councilor for the Lasallian Region of North America (2007-2014) and Visitor of the legacy Baltimore District (2001-2007). Before being appointed Visitor, Brother Bob was the director of education for the then United States-Toronto Region. He also served as executive secretary for the former Regional Education Board and College Presidents Association. Before his years in District, Regional and Institute leadership, Brother Bob served as a missionary in the Philippines for 11 years and in a variety of administrative positions in schools in the United States.

“The Brother John Johnston Award is a fitting recognition for Brother Robert Schieler,” shared Brother Robert Schaefer, FSC, DENA Visitor. “His commitment to ensuring the vitality of the Lasallian charism has been a hallmark of his leadership over many decades, including his time as Superior General of the Institute. Brother Bob has prioritized innovative mission formation programs and engaged Lasallian Partners to take on leadership roles throughout the global Lasallian family. His efforts reflect the creative dynamism that characterized Brother John Johnston.”

In addition to the Johnston award presentation, Distinguished Lasallian Educators from each District in the Lasallian Region of North America were honored. Read about those educators here.