Huether 2022 Gathers Lasallians Together and By Association

The 49th annual Huether Lasallian Conference brought Lasallians back to Baltimore, Maryland, to celebrate the theme “Together and By Association: Responding to the Signs of the Times.” The gathering took place November 17-19, 2022, with more than 200 attendees.

“I thought this Huether experience was one of the best conferences I’ve been to,” said Daniel Nguyen, a teacher at De La Salle Blackfeet School in Browning, Montana, who attended Huether for the first time. “To be able to network and be part of a bigger Lasallian world means so much to me. This reaffirms my dedication and passion for the mission, and I look forward to spreading that mission and passion among my staff members back home.” 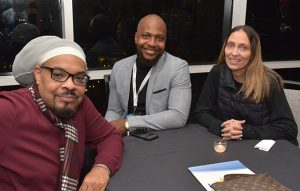 Before the opening session on Thursday, first-time attendees—nearly half of participants—gathered for a social to help them meet other people and prepare to get the most out of their Huether experience.

“It was a great opportunity to mix and mingle in a beautiful location with others, to see how many people are first-time attendees so you don’t feel like you’re alone,” shared Doug Brummel, first-time attendee who serves as pastoral director at Mullen High School in Denver, Colorado.

Following the social, Huether officially began with Mass, a welcome and presentations of the Brother John Johnston, FSC Award and Distinguished Lasallian Educator awards. Brother Robert Schieler, FSC, was honored with the Johnston award for his significant contributions to the Lasallian mission as Superior General and beyond. Eight educators from across the Region were honored for their work in touching the hearts and minds of their students. The evening wrapped up with a reception to celebrate the honorees with music provided by the Calvert Hall College High School jazz ensemble. 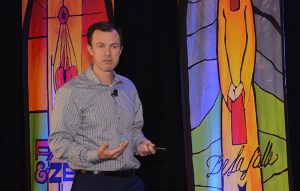 “I think it’s so interesting to hear what’s going on in the minds of our young people,” said Monica Lauzurique, director of La Salle Educational Center in Homestead, Florida. “We know that they’re very complex, and there’s so much going on. It’s the matter of getting to them, being able to have the right tools, ask the right questions and be present.”

“In this moment in time, having such applicable information to help us bridge with a generation that really has a lot for us to learn from them was important to me,” said Karin McClelland, director of the Mission and Ministry Center at Saint Mary’s College of California in Moraga.

Friday afternoon included breakout sessions and District meetings, ending the day with dinners by District. Saturday began with prayer, followed by a panel discussion facilitated by Dr. Kurt Schackmuth, vice president for mission and associate provost for student success at Lewis University in Romeoville, Illinois, with panelists Brother Chris Patiño, FSC, General Councilor; Jamal Adams, principal of La Salle College Preparatory in Pasadena, California; and Janell Kloosterman, AFSC, director of leadership formation in the District of San Francisco New Orleans. Panelists discussed how Lasallians are responding to the signs of the times and the challenges of today.

Brother Chris shared an opening message to lead into the panel discussion, offering reflections the General Council has been having in response to the calls of today. He hoped the discussion allowed attendees to see things anew and be encouraged by each other.

“For us to see things with new eyes, to not be intimidated, not to be overwhelmed necessarily by the challenges, but to say perhaps all of the challenges that we are facing today—not only us as a Lasallian educational community, but in general—might be an opportunity to see anew to try new and to embrace the challenges before us,” shared Brother Chris.

“I really liked Brother Chris’ introduction to the panel,” said Dan Dowling, instructor at De La Salle Institute in Chicago, Illinois. “I think it’s incredible that know we have a Brother who’s traveling the whole world and taking time to be with us and who’s personable and is reaching out to us. He was inspiring. It was comforting to hear him that we’re all challenged, that we’re not alone in our ministries, that that really brought home the together and by association theme.”

The rest of Saturday included a second round of breakout sessions, a Lunch and Learn sponsored by Manhattan College where participants could talk with fellow Lasallians in similar roles, a synthesis session and closing prayer. 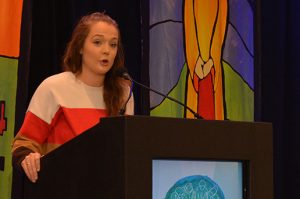 “It’s been very good. It’s very engaging,” said Maggie Qualter, campus minister at Resurrection College Prep High School in Chicago. “I think all the speakers, the keynote speaker, the panelists, everyone has been very engaging in very relevant topics. I think it’s been really good to meet with fellow educators and social workers and counselors and just different people throughout the Lasallian network and really see that you are a part of a bigger picture and to feel engaged and welcomed in that has been a really, really special thing.”

“When I first heard about this conference, I didn’t think it was for me. I am a communications director,” said Sam Jarosz from Christian Brothers High School in Sacramento, California. “But when I got here and going through all the sessions, I am so excited to be proven totally wrong. What we have learned is not only completely applicable in my job as a communicator, but also just as a human being. I feel like I have the tools to talk to other adults, coworkers, to the community in a way that is inclusive and intentional and fosters that community of belonging that we’re all trying to build.”

The opportunity to meet Lasallians from all over the Region and build community is frequently named as a powerful experience at Huether, from educators who are attending for the first time to those who have been to many years.

“Every year that I come to Huether, I take back to the community,” said Diahann Larson, AFSC, director of Lasallian ministry at St. Michael’s High School in Santa Fe, New Mexico. “It’s the people. It’s just the joy, the happiness, the love, the passion.”