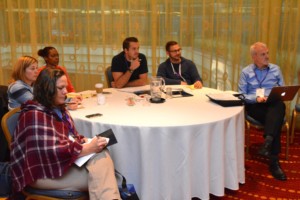 Lasallian educators returned to their ministries with a strengthened sense of community following their experience at the Huether Lasallian Conference, which took place November 15-17, 2018.

“I feel at home. I feel it is a family,” said Brother Martin Montoya, FSC, Ed.D., coordinator of the International Lasallian Institute for Sustainability and the Environment at Lewis University in Romeoville, Illinois. “Sometimes you are very focused on your job, but you don’t know what other people are doing. There were people who I didn’t know, but they were very open to speak about different issues, about what they are doing.” 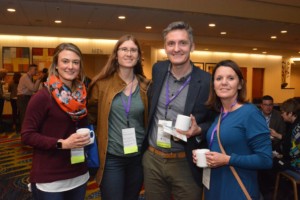 More than 200 Lasallians gathered in Minneapolis, Minnesota, for the 45th annual conference, themed “Limitless Potential: Transforming Lasallian Communities.” Inspired by the Lasallian Reflection for the 2017-2018 liturgical year, Lasallians Without Limits, the theme invited Lasallians to explore the critical role they play in transforming communities by going beyond geographical and societal borders. Keynote presenters, breakout sessions, and time for networking and discussion helped Lasallians explore the theme.

“It’s been a great experience to connect with other Lasallians from various missions around the Region and to learn about what people are doing,” said Mary Wilby, assistant professor at La Salle University in Philadelphia, Pennsylvania. “It’s given me some ideas about what I can take back to my university to tell other folks about what other Lasallian schools are doing.”

Before the opening session, a social, sponsored by Saint Mary’s Press in Winona, Minnesota, welcomed first-time Huether attendees, like Jessica Kaluzny, a first-year Lasallian Volunteer (LV) who is serving as a religion teacher at De La Salle Elementary at Blessed Sacrament in Memphis, Tennessee. Kaluzny said the Huether experience has helped shape her Lasallian identity.

“I’ve just appreciated getting to be involved in a community that is far greater than the LV community,” Kaluzny said. “Something I took away is that the Lasallian call is so much greater than the individual person. It’s something that is implemented worldwide and I think that was represented in a lot of the sessions and the keynote speakers.”

The conference opened Thursday with a keynote address by Peter Stemp and Brother Téfio Raoul Traoré, FSC, both associate directors of De La Salle Solidarietà Internazionale – ONLUS, who encouraged attendees to bring the global Lasallian family to their students and invite them into deeper participation in the mission. Friday featured a keynote address by Dr. Michael “Mykee” Fowlin, psychologist, performer and poet, who shared the idea of the limitless potential that exists when we get to know people for who they really are. Breakout sessions and gatherings by Districts offered opportunities for new perspectives, reflection, professional growth, and building community.

“I feel grateful for having participated in this event. I loved all of the workshops I’ve been in,” said Philippe Blais, animator at Centre Notre-Dame de la Rouge in Grenville-sur-la-Rouge, Québec. “As I am working on a project in our District, the theme about being called, it really meant something to me. I will hold this in my heart and it will be part of my reflection for a long time.” 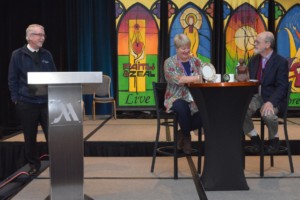 Huether turned its focus to the Year of Lasallian Vocations on Saturday with a keynote address, panel discussion and breakout sessions. The Year of Lasallian Vocations will be celebrated during the 2018-2019 liturgical year, which will start on December 2, 2018, to mark the 300th anniversary of Saint John Baptist de La Salle’s entry into eternal life and celebrate the impact of the mission he started. The timing of these sessions coincided with the start of the Lasallian Jubilee Year, which the Holy See declared in honor of the anniversary.

The morning began with a keynote address and panel discussion, sponsored by Christian Brothers Services. Brother Timothy Coldwell, FSC, General Councilor for the Lasallian Region of North America, and a panel of educators invited participants to reflect on their vocational callings in light of this anniversary year. Breakout sessions focused on vocations following the address, giving participants an opportunity for discussion. 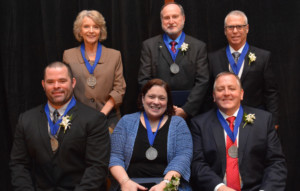 “The idea to be willing to accept invitations. Often you’re going to be taken in a direction that you never thought you’d be taken in,” said Robert Lundy, principal of De La Salle College “Oaklands” in Toronto, Ontario. “Having worked at a Lasallian school for 23 years, it’s always important to know that we are pulling the oars in the same direction and knowing that we always have one another to look out for.”

The conference concluded Saturday evening with a banquet honoring Distinguished Lasallian Educators from each District, along with the Brother John Johnston, FSC Award honoree, Gery Short, AFSC. The Most Reverend Bernard Hebda, Archbishop, celebrated Mass prior to the banquet.

Huether is hosted by the Office for Lasallian Education at Christian Brothers Conference in Washington, D.C. This year marks the conference’s return to Minneapolis, which is where the first gathering was held in 1973. Huether will be held in Minneapolis again in 2019. Check out the highlights using #Huether2018 on Facebook and Twitter.