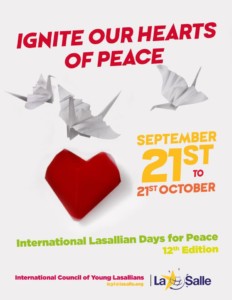 The 2018 International Lasallian Days for Peace (ILDP) will begin on September 21 (the United Nations’ sanctioned International Day of Peace) and will run through October 21. The theme for this 12th annual event is “Ignite Our Hearts of Peace!” ILDP is an initiative of the International Council of Young Lasallians (ICYL).

The 2018 ILDP poster was created by Antonio del Rosario from the Lasallian East Asia District. A toolkit of resources, developed by the Europe/Mediterranean Region’s Young Lasallians Council, has been made available and includes: a PowerPoint with slides for 21 daily reflections (starting on Friday, September 21); accompanying information, including notes and scripts for all 21 reflections; a video of students from the Great Britain, Ireland and Malta District praying the ILDP Peace Prayer together; and four videos, one for each week.

The Regional Council of Young Lasallians (RCYL) will sponsor a Regional peace observance to mark the beginning of ILDP.

The ICYL will promote ILDP on social media, including Facebook and Twitter. You can get involved in the online effort using the hashtag #ILDP2018.

Read a letter from the ICYL