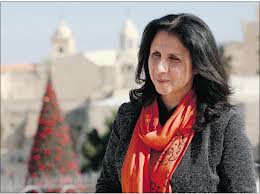 Vera Baboun, a 1985 graduate of Bethlehem University, has been elected as the city of Bethlehem’s first female mayor. She assumed the role for a four-year term before Christmas.

In addition to being a Bethlehem University graduate, Baboun also served as an English faculty member there before she was elected mayor. She not only taught the standard course material for English, Baboun recognized the importance of integrating relevant and related topics, such as gender equality and human rights. The widowed mother of five was also the principal at a nearby Catholic high school.