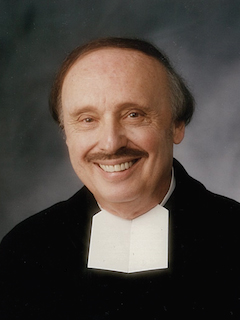 Born and raised in San Francisco, he was a junior at Commerce High School in San Francisco when the United States entered World War II. After graduating in 1943, he enlisted in the U.S. Navy and served as a medical corpsman and dental assistant until his discharge in 1946. Three months later he began his studies to become a De La Salle Christian Brother, receiving the habit on January 25, 1947. Brother Casimir took his final vows in 1953 at Saint Mary’s College.

Throughout the years he served as a teacher at Saint Mary’s High School in Berkeley, Sacred Heart High School in San Francisco, Cathedral High School in Los Angeles, and La Salle High School in Pasadena. After earning his master’s in library science from the University of Southern California, Brother Casimir returned to Saint Mary’s College in 1977 to serve in several capacities in the library until his retirement as director in 1987.