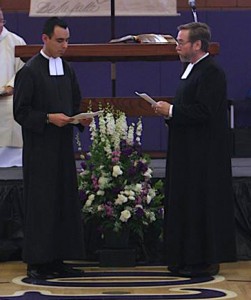 In an auditorium filled with more than one hundred family members, friends, students, and Brothers, Brother Christopher Patiño made his final vows as a De La Salle Christian Brother on Sunday, June 9th. The mass of final profession was celebrated at his alma mater, Cathedral High School in Los Angeles, CA.

After the ceremony, Brother Christopher thanked the many individuals who helped lead him to this occasion of celebration, including his parents, sisters, friends and colleagues. He also acknowledged the role of his fellow Christian Brothers in accompanying him on his path of faith and vocation formation.

“Inspirational, faithful, bold, passionate, and humorous are only a few words I would use to describe this group of men,” he said. “Thank you for allowing me to join you in this wonderful vocation, for the trust and love you have shown me, and for your faith and zeal for the mission. I look forward to continuing to grow into this vocation and learning from you.” 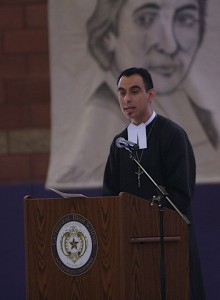 Brother Christopher received the habit in September 2007. He taught at Cathedral High School from 2008 to 2012, when he was assigned to his current position as religion teacher and Dean of Discipline and Student Services at San Miguel High School in Tucson, AZ.