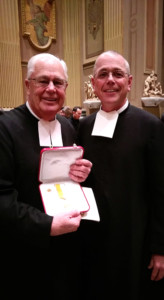 Brother Richard Kestler, FSC, of the District of Eastern North America (DENA), was among 28 men and women in the Archdiocese of Philadelphia to receive papal honors from Pope Francis. The honors are given to reward dedication and exceptional service to the Church.

The honors were conferred upon the individuals by Archbishop Charles Chaput during a Vespers service on Sunday, January 21, at the Cathedral Basilica of SS. Peter and Paul in Philadelphia, Pennsylvania.

Each of the honorees “has performed some exceptional service for the church or offered some form of outstanding Christian witness in a generous and sustained way – in education, philanthropy, diaconal and religious life, prolife and vocations work, social ministry, and other apostolates,” said Archbishop Chaput. “Each has earned the gratitude of the Holy Father and our whole Catholic community.”

Brother Richard has dedicated many years as a classroom instructor at various Catholic schools and Lasallian ministries. He served as president of West Catholic Preparatory High School in Philadelphia, from 1999 to 2005 and again from 2012 to 2016 before retiring. He continues to further the mission of Catholic education as a volunteer at West Catholic and La Salle University, also in Philadelphia, and is the community director at Anselm Hall, on the university’s campus.