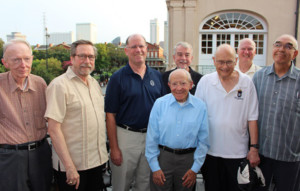 With the theme “Procuring God’s Glory from Generation to Generation,” the celebration recognized the achievements of the Brothers in Louisiana and celebrated with the Louisiana Lasallian family the life of the Brothers and their mission with Lasallian Partners in the world today. Brothers from across the District were joined by a large contingent of local Partners, benefactors and friends for morning Mass at Saint Louis Cathedral, a reception and presentation at the Old Ursuline Convent Museum, and a reception and river cruise on the Steamboat Natchez. 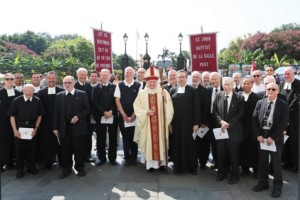 The Brothers were first sent to the Diocese of New Orleans in 1819, but administrative confusion resulted in the venture being short-lived. They returned to Louisiana from 1851-1900, operating schools until epidemics and financial hardships forced them to withdraw a second time. Then, in 1918, a number of Brothers – who four years earlier had fled the Mexican Revolution – were assigned to Covington, Louisiana, to assume operation of Saint Paul’s School from the Benedictines of Saint Joseph’s Abbey. That same year, in New Iberia, Louisiana, another group of Brothers established Saint Peter’s College (a high school), now Catholic High. Both the De La Salle Christian Brothers and schools conducted by them have been present in Louisiana ever since.

In March 2019, the District will mark the 150th anniversary of the Brothers’ arrival in San Francisco, California.