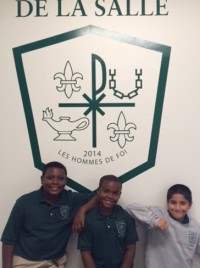 De La Salle Academy opened in Concord, California, with a special ceremony on August 8, 2014. Thirty-four boys, equaling one fifth-grade class and one sixth-grade class, along with their families, Brothers and Lasallian educators, attended the inauguration blessing for this new Catholic, Lasallian middle school that will follow the Miguel model.

De La Salle Academy is a division of De La Salle High School, which was founded nearly 50 years ago and serves more than 1,000 students. The school’s plan is to add one class each year, until the school has its full complement of four classes, fifth through eighth grade, with a student body eventually totaling 80 boys. Marilyn Paquette is the new school’s principal.

Schools that follow the Miguel model focus on breaking the cycle of poverty through well-ordered and rigorous education, high student expectations and positive reinforcement. Applications are only accepted from families living at or below 185 percent of the federal poverty level. Kenneth H. Hofmann and his associates at The Hofmann Family Foundation funded the founding and operation of De La Salle Academy.