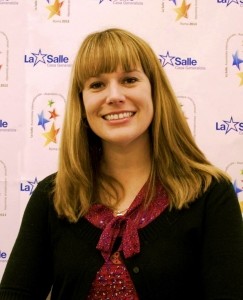 Former Lasallian Volunteer (LV) Heather Ruple Gilson, has been appointed as the co-secretary of Lasallian Association for the Institute of the Brothers of the Christian Schools (De La Salle Christian Brothers) by Brother Superior General Robert Schieler, FSC, effective September 2018.

After graduating from Saint Mary’s College of California in Moraga in 2001, Ruple Gilson served at The San Miguel School of Providence in Rhode Island, first as a Lasallian Volunteer from 2001-2003 and then in various staff roles from 2003-2011.

Following her time at San Miguel, Ruple Gilson served as director of Lasallian Students Programs for the then-District of San Francisco (2011-2014) and director of Young Lasallians for the District of San Francisco New Orleans (SFNO) (2014-2016). She has taken part in a number of District, Regional and International events, including as a delegate to the International Symposium of Young Lasallians (2006) and the International Mission Assembly (2013). She has also served on a number of District boards and councils for the District of Eastern North America and SFNO.

Ruple Gilson is a graduate of the Lasallian Leadership Institute, a former Christian Brothers Conference formation program. She previously served as a member of the LV Advisory Board and the Regional Vocation Formation Committee.