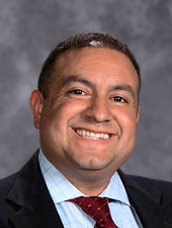 A new interim principal has been announced for the 2014-2015 school year at Justin-Siena High School in Napa, California. David Holquin has been appointed to serve in the role and will begin his 11th year at the school this fall.

“He embraces curricular innovation and development, understands the needs of both students as well as faculty, has a deep commitment to the Lasallian educational mission, and a faith life that drives his vocation as a Catholic educator,” wrote Robert T. Jordan, president and CEO of the school, in a letter to the Justin-Siena community.

Holquin has previously served at Justin-Siena as director of admissions and director of advancement. Prior to that, he served as a teacher, summer school principal and director of summer programs. He also provided leadership in campus ministry. Holquin succeeds Noel Hesser, who served as principal since 2007. Hesser will return to teaching at Justin-Siena and will also assist the administration in preparing for its 2015-2016 accreditation visit.

The search process for a new principal will begin later in the fall semester.