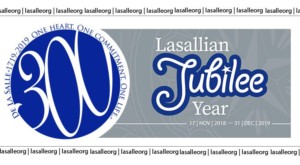 The Lasallian Jubilee Year will start November 17, 2018, in honor of the 300th anniversary of Saint John Baptist de La Salle’s entry into eternal life. Brother Superior General Robert Schieler, FSC, released a letter on May 15, 2018, announcing that the Holy See had declared 2019 a jubilee year. Brother Robert invited Lasallians to celebrate through practical acts of kindness and service to young people yearning for mercy and compassion. The jubilee year will end on December 31, 2019.

The Lasallian Jubilee Year is part of the Year of Lasallian Vocations, which marks the 300th anniversary of Saint John Baptist de La Salle’s entry into eternal life and celebrates the impact of the mission he started. The Year of Lasallian Vocations will take place during the 2018-2019 liturgical year, beginning on December 2, 2018, with Advent and concluding on November 24, 2019, with the feast of Christ the King.

Resources to celebrate the Year of Lasallian Vocations >