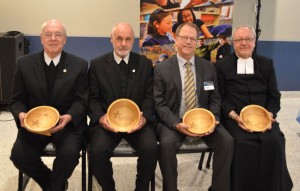 The Lasallian Volunteers (LV) honored supporters who have made notable contributions to the program with the 6th annual FSC Awards. The July 26 ceremony held at Lewis University in Romeoville, Illinois, honored recipients in the spirit of three Christian Brothers who embodied the LVs values of faith, service and community during their lifetimes.

The Bassen Service Award, which recognizes LV alumni who have continued a life of service, was presented to Thaddeus (Tad) Smith (LV, 90-92). Smith was honored for his service as principal and executive director at San Miguel School in Chicago, Illinois, and as a mentor and site director to Lasallian Volunteers.

Brothers James Gaffney and Stephen Markham were the recipients of the Johnston Faith Award, which recognizes supporters who have demonstrated great faith in the work of LVs by sharing time, talent or treasure. As president of Lewis University, Brother James was chosen for his support of every facet of the program, from recruitment to LV Scholars. LVs honored Brother Stephen for the role he plays in the formation of LVs as part-time staff and as the LVs primary contact in the Midwest District.

Brother Robert Walsh, FSC, received the Farrell Community Award. He was honored for the positive impact he has had on the community experience of volunteers through his commitment to walking with and being present to them at the DeLaSalle High School Community in Minneapolis, Minnesota.

Recipients are selected on a rotating basis between the Districts in the Lasallian Region of North America (RELAN). This year’s recipients were from the Midwest District. The 2016 honorees will be selected from the District of San Francisco New Orleans.