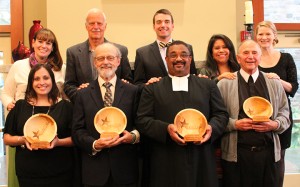 Lasallian Volunteers (LVs) honored supporters with the 2014 FSC Awards, which are named in the spirit of three De La Salle Christian Brothers who embody values of faith, service and community, and made significant contributions to the LVs. The 5th annual awards were presented on October 4 at Christian Brothers Center in Narragansett, Rhode Island.

Brother Brian Henderson, FSC, received the Brother John Johnston Faith Award, which recognizes a supporter who has demonstrated great faith in the work of LVs by sharing time, talent or treasure. Bro. Brian has facilitated the LV Debriefing Retreat for more than 10 years, and has lived and worked with LVs in Baltimore and Philadelphia.

Sarah Laitinen, Jim Ruck and Gail Britanik received the Brother Chris Bassen Service Award, which recognizes LV alumni who have continued a life of service. Laitinen (LV, 2007-2009) serves at The San Miguel School of Providence and on the young Lasallians committees for the Lasallian Region of North America (RELAN) and the District of Eastern North America (DENA). She also participated in the International Symposium of Young Lasallians. Ruck and Britanik (LVs, 1995-1996) were the first married couple to serve as LVs. Ruck was the LVs first director of development.

Brother Michael Reis, FSC, received the Brother Michael Farrell Community Award, which honors a Brother or Lasallian Partner in community who has lived with LVs and who holds the community experience in high esteem for himself and shares it with the LVs. Bro. Michael is a strong supporter of the LV program, and has lived and worked with LVs for more than 10 years.

Recipients are selected on a rotating basis between the Districts in RELAN. This year’s recipients were from DENA.

See more pictures >
More on the awards and previous honorees >