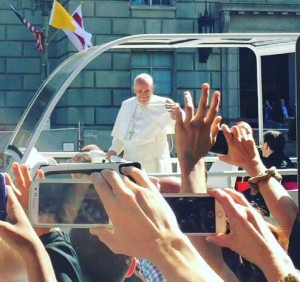 Lasallians from across the country took part in the excitement during Pope Francis’ first visit to the United States by attending a number of events held during the three-city tour.

Grant Collins, a student from Christian Brothers College High School in St. Louis, Missouri, who traveled to Philadelphia said, “When he was very close, I felt a very strong sense that God was with me. I had a big smile on my face when I got to see the Pope. I could not stop smiling.”

Pope Francis’ visit started on September 22 and ended September 26. It included stops in Washington, D.C., New York City and Philadelphia where students, teachers, Brothers, and college and university presidents gathered to catch a glimpse of the pope and hear his words.

Check out this special coverage of Lasallians who attended events >