Plans are underway to commemorate and celebrate the Tercentenary of the eternal life of Saint John Baptist de La Salle and the Year of Lasallian Vocations leading up to and during 2019. 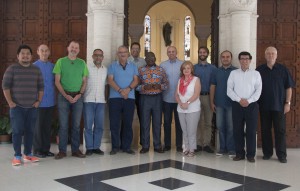 A new Institute committee met at the Generalate in Rome September 21-23 to focus on initiatives for 2019. The group, representing each Region of the Institute and a diversity of voices, established Institute goals to mark the year and a prioritization process of potential initiatives surfaced through the groups work. At the close of the meeting, the group met with Brother Superior General Robert Schieler, FSC, and members of the General Council to present their proposals.

Chris Swain, director of the office of Lasallian vocation ministry in the Lasallian Region of North America (RELAN), represented RELAN on the committee.

“It’s humbling and inspiring to be around a table listening to the diversity of ways the Lasallian mission is being lived out and have the opportunity leading up to and during 2019 to witness and celebrate that in a special way,” said Swain. “When thinking of initiatives, the areas of vocation, mission, spirituality and formation surfaced to help reflect on our scope. It was clear we wanted to put forward creative proposals that will invite and encourage all members of the Lasallian family to be excited to celebrate this moment, honoring our heritage, witnessing our vitality, and looking forward with great hope to the future.”

In RELAN, a Regional 2019 Committee has been formed to be attentive to the initiatives coming from the Center of the Institute, as well as map out those initiatives to mark the year in RELAN, and look at what will be happening at the District and local levels. The RELAN 2019 Committee members include Brother James Joost, FSC, Brother Michael Fehrenbach, FSC, Maryann Donohue-Lynch, Denis de Villers, Sarah Laitinen, Mark Freund and Chris Swain. They will meet at in November in Chicago in conjunction with the Huether Lasallian Conference.

As plans for 2019 and marking the Tercentenary and Year of Lasallian Vocations are formalized, more will be communicated both from the Institute and the Region inviting further input and participation in the initiatives leading up to and marking 2019.