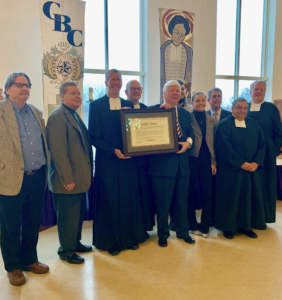 Michael Jordan, president of Christian Brothers College High School (CBCHS) in St. Louis, Missouri, received Letters of Affiliation (AFSC) during a ceremony held January 23, 2019. Jordan has served the CBCHS community for more than 40 years in roles including principal and vice president of Institutional Advancement. Approved by the Superior General, Letters of Affiliation are the highest honor the Institute of the Brothers of the Christian Schools can bestow on lay people, making them an honorary member of the Institute.