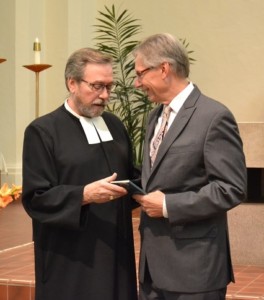 Longtime Lasallian Partner and former District of San Francisco New Orleans Office of Education director Gery Short was presented with Letters of Affiliation by the Institute of the Brothers of the Christian Schools on September 16, 2017, at Mont La Salle, Napa, California. The presentation was made on behalf of the Institute by Visitor Brother Donald Johanson, FSC.

Short has been associated with the Lasallian mission for nearly 40 years, serving as a teacher at Saint Mary’s College High School, before spending years in various leadership roles, first in the San Francisco District and then the San Francisco New Orleans District. He also served as the chair of the Lasallian Education Council, Regional Education Board and the 2006 International Mission Assembly. Additionally, he was was a lay consultant – among the first – for both the 1993 and 2000 General Chapters in Rome.

Read more from the District of San Francisco New Orleans >