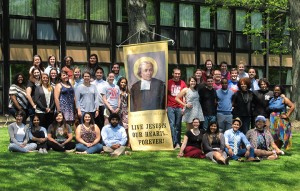 The Lasallian Volunteers (LVs) gathered to celebrate and reflect on their year of service during the annual Debriefing Retreat May 21-24, 2015.

“Debriefing was a great time to reflect with my fellow LVs on the ups and downs of the past year while looking forward to what’s on the horizon,” said Jeff Petroski, 2nd year LV serving at St. Peter’s High School on Staten Island.

The retreat was themed Your LV Mask & Masquerade. Thirty-eight LVs gathered at La Salle Manor in Plano, Illinois, and reflected on their experiences through a lens of wearing many masks throughout their year.

Brother Brian Henderson, FSC, facilitated the retreat, his 15th and final LV Debriefing Retreat. On Saturday night, retreat participants, families, friends, Brothers and alums of the program gathered for Mass, social and dinner to celebrate Bro. Brian. Those gathered for the occasion shared about Bro. Brian’s unwavering support and dedication to the Lasallian Volunteers and the Debriefing Retreat. LV staff and alums said farewell to Bro. Brian with a joyful reflection highlighting the 15 themes that gave each retreat its own experience.

The retreat consisted of small group breakout sessions, large group activities, sessions based on transitions, plenty of relaxation time, and a commissioning ceremony honoring those who have served in the 2014-2015 cohort.

“Debriefing is a weekend filled with reflection, love, fun, laughter and friends. I couldn’t ask for a better way to end my service year with an amazing group of people,” said Bridget Kennedy, 1st year LV serving at De La Salle Middle School at St. Matt’s in Saint Louis, Missouri.

At the end of the weekend, 19 LVs were commissioned to become members of the 2015-2016 cohort, in preparation to serve their 2nd year.