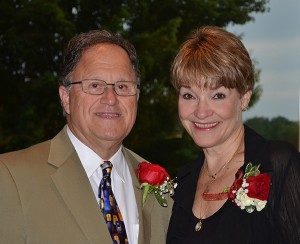 Two Lasallians from the Midwest District received Letters of Affiliation (AFSC) to the Institute of the Brothers of the Christian Schools. Tony Piscitiello and Mary Catherine Fox, Ph.D., of Saint Mary’s University of Minnesota in Winona were honored in a special ceremony held on Monday, August 4, 2014.

Fox has served at Saint Mary’s since 1990, in various roles including her current one as professor of Interdisciplinary Studies. Fox is also on the advisory board of the Institute for Lasallian Studies at Saint Mary’s, has served on the first Midwest District Mission Council including a term as chair, and has served on the board of directors for Saint Mary’s Press. She was a delegate to the De La Salle Christian Brothers USA/Toronto Regional Assembly in 2005 and the 1st International Assembly on Association & Mission in 2006. Fox received the Distinguished Lasallian Educator Award at the 2013 Huether Lasallian Conference.

Piscitiello, a part of the university’s community for the past 45 years, has served in numerous roles including his current one as the university advancement – senior advancement director. He has served on numerous committees and task forces of the university, and he has also served on the boards of directors of Cotter High School, Saint Mary’s Elementary Catholic School, and the Winona Area Catholic Schools Foundation, and on the boards of advisors of Immaculate Heart of Mary Seminary. He received the Distinguished Lasallian Educator Award at Saint Mary’s University on Founder’s Day in 2013.