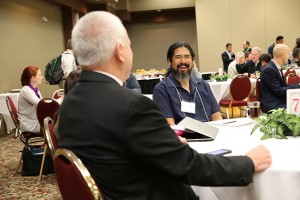 The symposium will be held September 27-29, 2015, at the Saint Mary’s University of Minnesota Twin Cities Campus with Superior General Brother Robert Schieler, FSC, as a keynote speaker. Newly announced, a second keynote speaker will be Hashem Shahin, Ph.D., an associate professor of human genetics at Bethlehem University in Palestine. He will discuss Bethlehem’s contribution to research on human genetics and cleft palate. The symposium will also feature a panel with representatives from each of the six Lasallian colleges/universities in the United States. The panel will discuss how higher education institutions support the underserved.

Registration is open and attendees can reserve hotel rooms at a discounted rate through August 31.

Saint Mary’s Institute for Lasallian Studies hosts the event, which the Lasallian Region of North America co-sponsors. The first symposium was held in 2012 with 43 participants. By 2014, it had expanded to include more than 120 Lasallians from around the world.