Alumni of Lasallian ministries worldwide gathered for the 7th  World Congress of the Association of Lasallian Alumni (UMAEL), which was held November 21-23, 2019, at the Radisson Blu in Minneapolis, Minnesota, with the theme “Beyond the Borders: One Heart. One Commitment. One Life.” The 7th  World Congress marked the first time that the international gathering was held in the United States and with participants from the Lasallian Region of North America (RELAN). It also celebrated the 25th anniversary of UMAEL. The gathering included participants from the United States, Mexico, France, Spain, Philippines, Democratic Republic of Congo, Japan, Panama, Italy, South Korea and Venezuela. 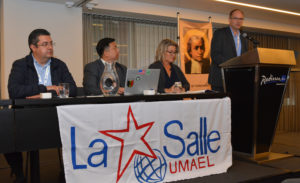 Panelists from each Region shared about alumni activities in their Region.

“Our greatest asset as alumni/ae of Lasallian schools, committed to supporting the Lasallian educational mission, is our sense of unity and belonging, rooted in faith,” said McClelland. “The real gift of this international association is that it is an easy way to share the various ways the Institute has established priorities to make Lasallian education available to the most vulnerable and it inspires us all to bring our gifts to the table to support these existing priorities, the Brothers and Lasallian educators worldwide … beyond borders.” 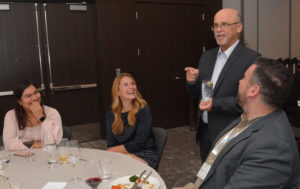 Brother Superior General Robert Schieler, FSC, was one of the keynote speakers and encouraged UMAEL to get involved in Beyond the Borders initiatives, set specific four-year goals, communicate about UMAEL, and help the Solidarity Project in Rumbek, South Sudan.

“It was very important to hear his vision about what the alumni are called to do,” said Oswaldo Aguilar Rivera from Mexico, who was elected general secretary of the executive committee. “In particular, the part about being better coordinated to communicate our actions because we lack that ability to let other people know what we are doing. So, it’s good that Brother Superior is aware of this and that he wants us to make more actions to communicate.”

This was the third UMAEL congress for Olivier Collet from France, who was elected as the new treasurer for the executive committee. He called the congress a unique and very rich experience and appreciated the significance of gathering with Lasallians from around the world. 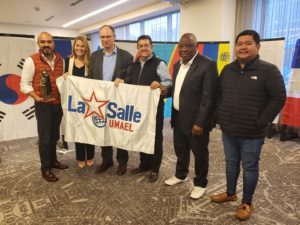 The new members of the executive committee will serve through 2023.

Another first for the congress was how the General Assembly gave the newly elected executive committee very specific goals for the next four years: communication (website, branding, social networks, emails), involvement in solidarity projects, collaboration with other networks of the Institute (ONLUS, Young Lasallians, International Association of Lasallian Universities), and structural and administrative organization (directory of associations, membership fees, efficiency).

“After its first 25 years of existence it is time to both learn from the accumulated experiences of the past (good and bad) as well as renew and re-envision the goals and objectives of UMAEL,” said Galván Illanes. “We have great leadership with such a diverse and complementary executive committee, so we must take the guidelines given to us and work together and by association not only with the federations and associations that make up our Union, but also with the rest of the Institute’s ministries and networks, always remembering our common objective: to serve those who need it most. We may do it through different ‘trenches’ and with different means, but always under the guidance and light of Saint John Baptist de La Salle.” 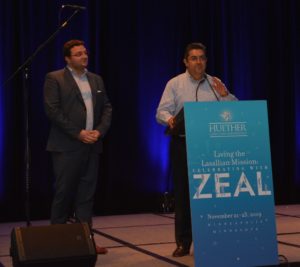 Congress participants had the opportunity to interact with Lasallians at the Huether Lasallian Conference, which took place across the street at the at the Minneapolis Marriott City Center November 21-23. They attended the opening session and social on Thursday and Mass on Saturday. During the opening session, Mickael Portevin and Galván Illanes told Huether participants about the purpose of UMAEL and expressed their gratitude for being invited to Huether.

UMAEL is an international organization that consists of alumni groups from Lasallian schools throughout the world. UMAEL is made up more than 50 alumni associations and federations and unites Lasallian alumni on an international level to foster a sense of belonging and association while promoting the Lasallian mission. The next World Congress will be held in four years, with the location being determined in two years.

Top photo: The gathering opened with a reception for attendees on Wednesday evening.